What I Did Over Spring Break

How are Publishers Rewarded for Exposing Linked-Data?

Jun 27th, 2013 at 12:01 pm
Disclaimer: This document poses the question asked in the title without offering anything which can be reasonably called an answer.  It is my hope that members of the relevant communities who know more than I do on the topic can provide some insight into potential answers.

Utilization of linked-data by applications is predicated upon the existence of accessible linked-data.  In much the same way that publishers were told they could put their content online in formats like HTML, we now tell them they can expose their information as linked-data using formats like RDFa and JSON-LD.  However, where the former had the fairly obvious benefit of making the publisher’s content visible to human consumers, the later seems to lack any immediately realizable end.

Lofty visions of automated agents and reasoning engines which would operate over the ever expanding web of linked-data have been touted since around the time that the phrase “Semantic Web” was being coined.  It was indicated that, by exposing their information as linked-data, publishers could “hook-in” to these agents, making themselves visible to their users.  Such agents however have yet to materialize and seem to be touted less and less from my observation, which I feel is unfortunate, but that’s an entirely different post.

Many “Semantic Web Applications” which I have seen, either in writings online or at conferences, are in-fact Semantically-Enabled applications which use some Semantic technologies, some of which have been born of the forge of the Semantic Web, in combination with other technologies (AI, NPL, etc), in order to build up a triple store and reason over it or operate upon it.  These have been interesting applications but they are not Semantic Web applications as they go well beyond the boundary of utilizing exposed linked-data.  Further, they are often operating in specialized domains over semantically enabled datasets and not over arbitrarily exposed information on publisher’s sites.  As such, in and of themselves, such applications are providing no reward to the average content publisher.

Search Engines have taken up the torch to some extent in the form of Schema.org.  This gives publishers a reason to expose their data as well as a concrete vocabulary to use in its exposition, but it positions the “Semantic Web” to be re-branded as “SEO 2.0,” which in my mind would be a loss of the initial vision.  It is, however, from what I can find, the only realizable end of publishing linked-data along with your content.

When talking about / attempting to explain the Semantic Web to friends, family, and co-workers, I often employ the Chicken or the Egg metaphor in accounting for why this concept has not yet become ubiquitous (though I am sure some would disagree with the statement that it is not ubiquitous).  If we take the Chicken to be the accessible data and the Egg to be applications, we may be getting closer to the Chicken, with the help of efforts such as Schema.org to an extent, which would give the Egg a raison d’être.  In my experience the lack of a reasonable Egg to point to greatly complicates the task of encouraging publishers to expose their information as linked-data.

A final note: I would be very happy to be corrected on my observations and to be told that the Egg already exists (ideally by being pointed to such an Egg).

Apr 22nd, 2012 at 3:50 pm
I experience a strange mix of excitement and dread every time I look out my kitchen window into my back yard.  It is a substantial canvas with amazing potential, however, before I can bring out said potential, I have to whitewash what is a fairly fouled canvas currently.

In case you did not follow the metaphor, allow me to be more blunt.  The yard is an overgrown mess.  Not only that, it is filled with artifacts of prior gardening attempts which are old, rotten, and half buried.  So as to not completely overwhelm myself I have set a goal of simply cleaning the slate this year.  That includes getting rid of all the junk which I no longer want back there, pulling up nearly every flower bed, turning over the earth everywhere I want to plant next year, and reseeding large portions of the lawn.  This also includes ripping up a few fairly substantial bushes and trees, but someone will be hired with cash monies for that job.

This weekend I set to digging up the bricks and cinder blocks which lined the rear garden.  The bricks I should be able to get reuse out of.  The cinder blocks however are in terrible conditions and, frankly, were not aesthetically appealing to begin with.  The job was only complicated by the fact that buckthorn, a plant who's roots are relentless, seems to run rampant through the yard currently, and had actually grown INTO the cinder blocks. 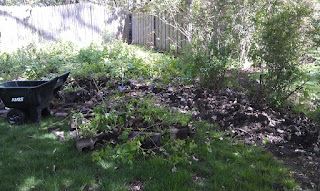 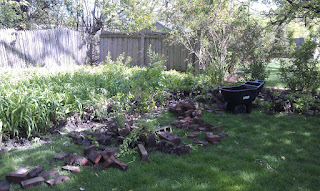 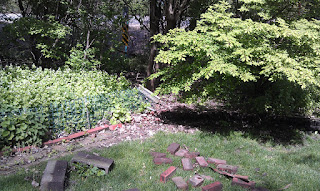 The next task I have set for myself is uprooting everything which is in the rear garden, followed shortly by turning over the earth in the garden to prep it for next year.   I'm considering also lining it with stones this year if I get around to choosing what form of masonry I want to decorate the yard with, but that's fairly low on the priority list.
expand post reduce post

May 28th, 2012 at 6:44 pm
When faced with leftovers I often seek to present them in a context other than that of the producing meal.  Tonight steak fajita leavin'z sat in my refrigerator (as they will for the next two days given the amount of steak I cooked yesterday) consisting of grilled skirt steak and grilled vegetables.  Having a few potatoes which I wanted to do something with as well, I decided to make a facsimile of twice baked potatoes, stuffed with the remains of the prior nights dinner.  Having no intention of putting creative energy into the name of the meal, I dubbed it "Steak Fajita Baked Potatoes" combining both the identity of the leftovers and the cooking technique for the potatoes.

Over the years I've learned to be more patient with baked potatoes.  Early on I would give a potato 30 minutes in the oven before assuming I had already left it in far too long.  Years later I've found that 50-60 minutes at 400 degrees is adequate for baking a potato ... a potato which is ideally covered in olive oil and kosher salt.  Tonight I think the potatoes actually went over 60 minutes, because I finished Zelda while cooking and was unwilling to disrupt the ending with details such as baking time.

Some credit for the meal must be given to the prior night's efforts.  The steak fajitas were in and of themselves a most acceptable meal, and while I'm not writing about them specifically, I will speak of the steak and the vegetables.  Skirt steak is the type of steak I prefer for fajitas .... or tacos .... or anything of that ilk.  It cooks quickly and it takes a marinade nicely.  I let the steak sit in a gallon zip lock bag for 5 hours with olive oil, apple cider vinegar, chili powder, garlic powder, cayenne pepper, paprika, cumin, salt, and pepper.  This I grilled up along with a compliment of vegetables consisting of red, yellow, and anaheim peppers, onions, and mushrooms, also covered in oil and apple cider vinegar.

Last night the above were put together as they would normally be for fajitas.  Tonight, the cold leftovers were chopped into small pieces and mixed with the potato innards.  Innards which were extracted after cooking and cutting the potatoes in half.  Innards which were also mixed with sour cream, cheddar cheese, olive oil, and some more salt and pepper (if I had some green onions I probably would have put that in there too, but I didn't have any).  Innards which were then spooned back into the potato shells to be baked another 10 minutes.

The result you can see above - and while not overly decorative (since I did not use any sort of piping equipment to put the filling back into the potato) the final product was greeted with rave reviews (from Laura) and also took a hot sauce admirably.